Two 13-year-olds going ballistic with their bats, smashing the opposition to a pulp, on their way to a then world-record 664-run unbeaten partnership. That knock in the Harris Shield Trophy is what first brought Sachin Tendulkar and Vinod Kambli into the limelight. Everyone’s heard that story.

But what many people haven’t heard is that Kambli (349 runs) had outscored Sachin (326) that day. And that after they declared and the opponents came out to bat, Kambli had picked up 6 for 37 with the ball.

Sachin Tendulkar and Vinod Kambli appeared on the national cricket scene almost at the same time; and going by their performance till then with equal talent. Yet, we find that Tendulkar went on to play for professional cricket for 24 years, while Kambli played professionally for barely seven years. Tendulkar played with such focus and single minded passion that he was able to prolong his competitive edge for a long period of time.

On the other hand, Kambli lost his focus on the game of cricket. All the fame and adulation apparently got to his head. Tales abound of alcohol and substance abuse. Some people claim that once the runs started flowing, Kambli got distracted by a flashy lifestyle, gold jewellery and women.

Tendulkar plodded on to correct his batting deficiencies while Kambli made no attempt to rectify his. The difference in their approach created a wide divergence in their career earnings- Tendulkar is reported to have a career earnings of US $ 115 million while Kambli barely made it with about $ 5 million.  In short, their story is how to build a competitive edge and how to prolong the period of competitiveness. Reading this story also brings to mind corporates who have a single minded focus on improving their competitive edge and make it last as long as they can.

I had read a paper by Michael Mauboussin that he had co-written with Paul Johnson way back in 1997, on Competitive Advantage Period, which explained the continuing high valuations assigned to the blue chip companies (http://people.stern.nyu.edu/adamodar/pdfiles/eqnotes/cap.pdf). This paper was written in the context of food companies. Recently I re-read it and was trying to interpret the principles laid out in that paper in the context of Indian companies. I had just received the annual report of Asian Paints Ltd for 2017-18 which also gave numbers for last 10 years. Having this data handy I decided to evaluate Asian Paints in context of CAP.

Messrs. Mauboussin and Johnson write “The focus must be on the economic drivers of a business, which can be defined as cash flow (cash-in versus cash-out), risk (and appropriate demanded return) and what we have dubbed “competitive advantage period”— CAP— or how long returns above the cost of capital will be earned.”

“It should be noted that in a well-functioning capital market all assets, including bonds and real estate, are valued using similar economic parameters. In the case of bonds, for example, the coupon rate (or cash flow) is contractually set, as is the maturity. The bond price is set so that the expected return of the security is commensurate with its perceived risk. Likewise for most commercial real estate transactions. At the end of the day, the process of investing returns to the analysis of cash flow, risk and time horizon. Since these drivers are not contractually set for equity securities, they are by definition expectational and, in most cases, dynamic.”

They further go on to define CAP- as “Competitive advantage period (CAP) is the time during which a company is expected to generate returns on incremental investment that exceed its cost of capital. Economic theory suggests that competitive forces will drive returns down to the cost of capital over time (and perhaps below it for a period). Said differently, if a company earns above market required returns, it will attract competitors that will accept lower returns, eventually driving industry returns lower.”

I have tried to apply the principle laid down by the authors in a simplistic manner. Having the 10 years’ ROCE data available from the annual report of Asian Paints, I calculated its WACC (weighted average cost of capital) for the same period. From the results we find that the Competitive Advantage (CA= ROCE – WACC) has shrunk from a high of 60% in 2009-10 to 26.6% in 2017-18. Even as the ROCE dropped from 74.4% in 2009-10 to 34.8% in 2017-18 its market cap has gone up from Rs 19593 cr to Rs 107469 cr over the same period. This rise in stock price has increased its cost of equity. The primary factors responsible for drop in CA are: a) its cost of equity is growing as the market cap grows b) its ROCE is falling in face of competitive forces. 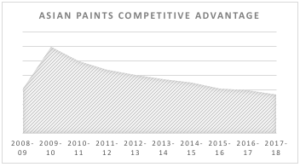 What can be the possible take-aways from this data? We know two things; that its ROCE is dropping in face of increasing competition, and that its cost of equity is growing with continuing high valuation assigned by the market. The consumer market is growing, albeit not at the rates desired by paint companies. These companies have invested in increasing capacities, increasing their market presence and launching new initiatives. All of these factors have led to a lower ROCE, as we can see from the chart in terms of a declining trend since 2010-11. Make no mistake though, Asian Paints still has a huge Competitive Advantage in earning a ROCE about 26% over its WACC.

Rising interest rates will have very limited impact on Asian Paints as debt forms less than 1% of its Enterprise Value.  A fall in ROCE may see the CA shrink further. If this happens, the markets will react instinctively to bring down the stock price, thereby balancing out the drop in ROCE with a lower stock price. The question though is will the CA ever shrink to zero i.e. will the CAP totally vanish or the nature of the business will ensure that the company continue to earn an ROCE in excess of its WACC.

I feel that the latter is more likely outcome. The quality of management, superior brand equity, large market presence, low debt and high free cash flows will ensure that ROCE for Asian Paints will always be more than its WACC, and CAP will never fade away. Whether the stock will rise or fall will depend on its CA and the market’s perception of its Competitive Advantage Period.

Disclaimer: This is not intended to be investment advice nor any buy or sell recommendation. Readers should take independent advice before acting on the basis of any information contained herein.